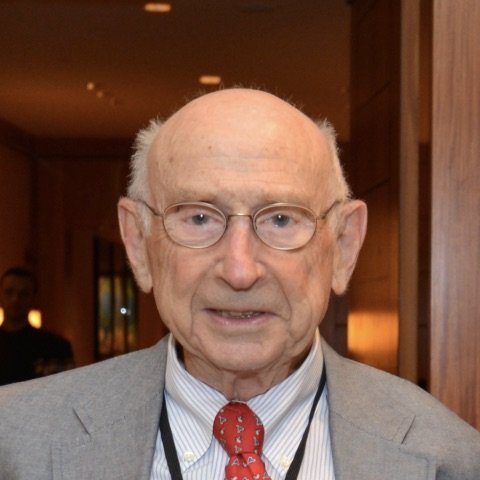 S James Adelstein, Past President of the Vallee Foundation, received his MD degree from Harvard Medical School and his PhD in Biophysics, under the preceptorship of Bert Vallee, from the Massachusetts Institute of Technology.  He did postdoctoral work at Cambridge University and at the Johns Hopkins Hospital.  In the 1970s he organized nuclear medical units at Peter Bent Brigham (now Brigham and Women’s) Hospital, Children’s Hospital of Boston, and Dana-Farber Cancer Institute, which were affiliated to become a teaching, clinical and research organization known as the Joint Program in Nuclear Medicine.  Dr Adelstein served as the Executive Dean for Academic Programs at Harvard Medical School from 1978 to 1997 and, subsequently, as Daniel C Tosteson University Professor.  He is a member of the Institute of Medicine and fellow of The American Association for the Advancement of Science.  He is recipient of the Society of Nuclear Medicine and Molecular Imaging’s Hermann Blumgart, Paul Aebersole, and George de Hevesy Awards.  His research has focused on the biophysical effects of highly ionizing radiation emitted by radionuclides; microdosimetry of internal emitters; and therapeutic applications of radionuclides in tumor models.  Dr Adelstein served as Vice President of the National Council for Radiation Protection and Measurements from 1983 to 2002 and as chair or co-chair of several National Academies' committees concerned with radiation and nuclear studies.