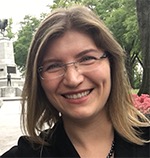 Viviana Gradinaru and her research group at Caltech are developing technologies for neuroscience (optogenetics, tissue clearing, and viral vectors) and using them to probe circuits underlying locomotion, reward, and sleep.  The Gradinaru group has made advancements in tissue clearing by tissue-binding size-adjustable polymeric scaffolding. They have also bypassed the challenge of crossing the blood brain barrier by engineering viruses to deliver cargo, such as fluorescent labels, efficiently and with cell specificity to the entire central nervous system for functional and morphological access to defined cell populations.  Recent publications from her group and collaborators have also demonstrated methods for RNA labeling in cleared samples to map cell identities in brain tissue and infectious agents in challenging clinical samples.  Professor Gradinaru has also been very active in teaching and service, participating with lab members in regular technology training workshops at Caltech and for summer courses at Cold Spring Harbor Laboratory. She has also been running the CLOVER Center (Beckman Institute for CLARITY, Optogenetics and Vector Engineering) at Caltech, which provides training and access to the group's reagents and methods for the broader research community.

Viviana Gradinaru is a Professor of Neuroscience and Biological Engineering at the California Institute of Technology (Caltech).  She earned her BS in 2005 from Caltech and her PhD in 2010 from Stanford University.  Professor Gradinaru has received the NIH Director’s New Innovator Award and a Presidential Early Career Award for Scientists and Engineers, and has been honored as a World Economic Forum Young Scientist and as one of Cell’s 40 under 40. Gradinaru is also a Sloan Fellow, Pew Scholar, and Allen Brain Institute NGL Council Member, and received the inaugural Peter Gruss Young Investigator Award from the Max Planck Florida Institute for Neuroscience.