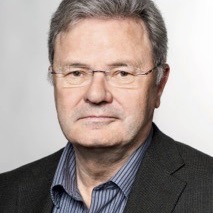 Wolfgang Baumeister studied biology, chemistry and physics at the Universities of Muenster and Bonn, Germany, and obtained his PhD from the University of Düsseldorf in 1973. From 1973-1980 he was Research Associate in the Department of Biophysics at the University of Duesseldorf. He held a Heisenberg Fellowship, spending time at the Cavendish Laboratory in Cambridge, England. In 1982 he became a Group Leader at the Max Planck Institute of Biochemistry in Martinsried, Germany and in 1988 Director and Head of the Department of Structural Biology. He is also an Honorary Professor on the Physics Faculty at the Technical University in Munich.

Wolfgang has made seminal contributions to our understanding of the structure and function of the cellular machinery of protein degradation, in particular the proteasome. Moreover, he pioneered the development of cryo-electron tomography, a method allowing the study of macromolecular structures in situ, i. e. in unperturbed cellular environments. His contributions to science have been recognized by numerous awards including the Otto Warburg Medal, the Schleiden Medal, the Louis-Jeantet Prize for Medicine, the Stein and Moore Award, the Harvey Prize in Science and Technology, the Ernst Schering Prize and the Ernst Jung Medal for Medicine. He is a member of several academies including the US National Academy of Sciences and the American Academy of Arts and Sciences.