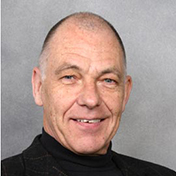 Gerard Canter’s research has focused on the molecular characterization of redox enzymes and proteins (mainly copper proteins) by NMR and EPR, X-ray crystallography, electrochemistry, single molecule spectroscopy and protein engineering.  The cloning of the gene for the protein azurin by him in 1987 opened up new possibilities for the study of structure/function relationships of blue copper proteins.  His current research concentrates on studying biological redox processes by single molecule techniques and on designing in vitro and in vivo biosensors.

Dr Canters received his primary degree in Chemistry/Chemical Physics at Amsterdam University with Jan Hoijtink in 1966 and his PhD at Nijmegen University with Bert de Boer.  In 1969 he received the Royal Dutch Shell award for young chemists.  After a post-doctoral fellowship with Charles S Johnson, Jr, at Chapel Hill (USA) he joined the academic staff of the Physics Department at Leiden University in 1972.  In 1976 he moved to the Organic and in 1980 to the Inorganic Chemistry Department at Leiden.  After a two-year stay in Oxford he returned to Leiden in 1982 to establish the Metallo-protein Group and in 1992 was appointed Professor of Biophysical Chemistry in the Biochemistry Department.  He held a Vallee Visiting Professorship at Oxford University and visiting professorships at the Royal Danish Veterinary University and the University of Salerno.  He has been a visiting scientist at the Tata Institute for Fundamental Research, Mumbai, and the NARA Institute for Science and Technology, Kansai, Japan.  Since 2005 he is connected with the Leiden Institute of Physics, Leiden University.