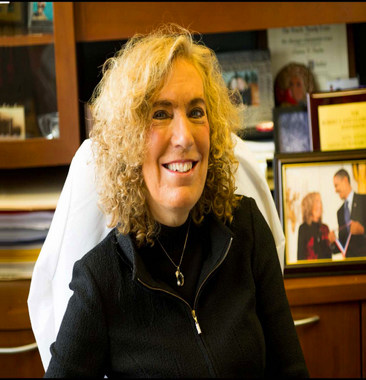 Elaine Fuchs is the Rebecca Lancefield Professor in Mammalian Cell Biology and Development at The Rockefeller University, and a Howard Hughes Medical Institute Investigator. She has published over 300 papers and is renowned for her research in skin biology, its stem cells and its associated human genetic disorders. Using skin as a model, Fuchs studies how resident stem cells communicate and respond to their local neighbors (their “niche”) and how these signals prompt them to adjust their program of gene expression and begin to make tissue, and how new signals instruct them when to stop once enough tissue has been made. By studying these basic properties of stem cells, Fuchs’ team has made major contributions towards understanding how tissues repair injuries and how abnormalities in stem cell behavior can lead to cancers. She has devised and employed innovative and imaginative approaches to biomedical research for over three decades.  Recently, her team developed technology to conduct genome-wide RNAi screens in mice for oncogenic regulators of growth, and they’ve identified a population of stem cells in cancers that are resistant to chemotherapy.

Fuchs received her PhD in Biochemistry from Princeton University.  After her postdoctoral research at the Massachusetts Institute of Technology, she joined the faculty at the University of Chicago in 1980. In 2002, she relocated to The Rockefeller University.  Fuchs’ awards and honors include the Presidential Young Investigator Award, Richard Lounsbery Award from the National Academy of Sciences, Novartis-Drew Award for Biomedical Research, Dickson Prize in Medicine, FASEB Award for Scientific Excellence, National Medal of Science, L’Oreal-UNESCO Award, Madison Medal, Passano Award, Albany Prize, March of Dimes Prize, Pasarow and International Pezcoller Awards for cancer research, the EB Wilson Award for cell biology, and the 2017 McEwen Award for Innovation.  Fuchs is an elected member of the National Academy of Sciences, Institute of Medicine, American Academy of Arts and Sciences, American Philosophical Society, European Molecular Biology Organization, the Pontifical Academy for Sciences, and the inaugural group of 100 American Association for Cancer Research Fellows.  She holds honorary doctorates from Mt. Sinai/New York University School of Medicine, University of Illinois and Albany Medical College.  Fuchs is past President of American Society of Cell Biology, International Society for Stem Cell Research and Harvey Society, and is on the Board of Governors of the New York Academy of Sciences.  She has trained over 25 graduate students and 100 postdoctoral fellows, most now at major academic universities and medical schools.