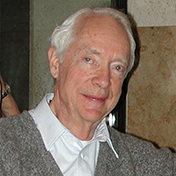 Earl Davie’s discovery of the “waterfall cascade” sequence for blood clotting in 1964 paved the way for our understanding of the biochemical events leading to fibrin formation.  This basic mechanism continues to be the basis for currently used diagnostic tests and therapies.  He and his colleagues devised the revolutionary theory that proteins in blood plasma are converted to active enzymes or cofactors by minor proteolysis in order for blood to clot and then proceeded to identify and characterize nearly all of these proteins in great detail throughout the 1960s and '70s.  He then isolated, sequenced, and expressed the genes coding for these clotting factors and identified mutation in the genes of patients with various bleeding disorders.

Dr Davie earned both his undergraduate degree in chemistry (1950) and his PhD in biochemistry (1954) at the University of Washington.  He then worked as a postdoctoral fellowship with Dr Fritz Lipmann (1954-1956) at Harvard before joining the faculty at Case Western Reserve (1956) where he collaborated with Professor Oscar Ratnoff.  He returned to the Biochemistry Department at the University of Washington in 1962 where he served as chairman (1975-1984).  In recognition of his contributions to science, Dr Davie  received many awards and honors.  Among these are the International Prize from the French Association for Hemophilia (1983), the Waterford Bio-Medical Research Prize from the Scripps Clinic and Research Foundation (1985), the Robert P.  Grant Medal from the International Society on Thrombosis and Hemostasis (1989), the Stratton Medal from the American Society for Hematology (1993), the Distinguished Achievement Award from the American Heart Association (1995), and the Bristol-Myers Squibb Award (1999).  He was a member of the National Academy of Sciences, the American Academy of Arts and Sciences, and the Royal Danish Academy of Science and Letters.