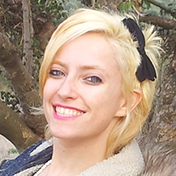 Miri Krupkin is a doctoral student in structural biology in the laboratory of Nobel Laureate Ada Yonath at the Weizmann Institute of Science where she is studying the structure and function of ribosomal particles, the mechanisms of ribosomal antibiotics, and the origin of the contemporary ribosome.  She earned her BSc (Magna Cum Laude) in Chemistry from Bar-Ilan University in 2008, and her MSc at the Department of Structural Biology of the Weizmann Institute of Science in 2011.  She regularly gives science lectures to high school students, through the same programs in which she participated as a teenager.  Currently she is an Adams Fellow of the Israel Academy of Sciences and Humanities.