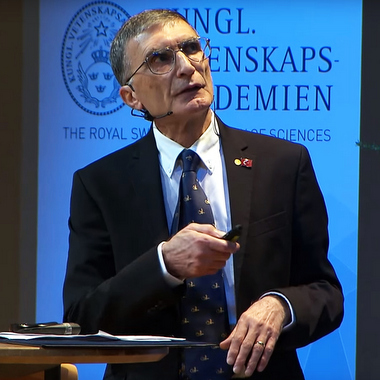 Born in 1946 in Savur-Mardin, Turkey, Aziz Sancar was the seventh of eight children born of illiterate parents who stressed education. Sancar took well to school and to soccer.  Despite trying out for Turkey’s under-18 national soccer team, he chose to focus on his studies at Istanbul Medical School from which he graduated in 1969 before practising medicine near his hometown for two years.

Sancar then earned a NATO fellowship to study at Johns Hopkins, where Stan Rupert had discovered DNA repair in 1958. By the time Sancar met him, Rupert had moved to the University of Texas at Dallas, where he was trying to purify the repair enzyme photolyase, but he was unable to because the enzyme is not abundant. Sancar joined Rupert as a graduate student in 1974 and worked to increase the amount of the enzyme by cloning the gene that encodes for it. Sancar cloned the gene in 1975, making him the first scientist east of the Rocky Mountains to clone a gene. For this work, Sancar earned his PhD in 1977 and moved on as a postdoc to Yale University, where he invented the maxicell method of identifying proteins and figured out the mechanism of another DNA enzyme system called nucleotide excision repair. Sancar cloned the genes responsible for this kind of DNA repair in bacteria and purified the proteins encoded by these genes. These proteins, acting together, cut out a 41-nanometer stretch of the double helix strand to remove damaged DNA.

Sancar returned to his photolyase research in 1982 when he was recruited to UNC by Mary Ellen Jones, PhD, the first female department chair at UNC. Here, he finally purified photolyase and – in collaboration with his wife Gwen Sancar, PhD, and others – showed that the enzyme works as a blue-light-powered machine to repair ultraviolet light-induced DNA damage.

This mechanism repairs the damage to human skin caused by sunlight every day. It is also the mechanism that cancer cells use to defend themselves against the DNA damage caused by the common cancer drug cisplatin. This work culminated in an excision repair map of the entire human genome, which his lab published in 2015.

In addition to this work, Sancar also discovered one of the four genes that control our biological clock. While investigating whether humans have photolyase, he found that humans do have a similar gene that encodes for a similar protein, but the human protein has no repair activity. He named it cryptochrome and showed that it is a vital component of the molecular clock that sets our daily rhythm. Most recently, he discovered how the four circadian clock proteins interact throughout the 24-hour cycle and what this means for treatment paradigms of various diseases, such as cancer.

Sancar, who co-founded the Aziz and Gwen Sancar Foundation in Chapel Hill in 2009, has received numerous honors and awards for his achievements: • 1984, Presidential Young Investigator Award, National Science Foundation •1990, American Society for Photobiology Research Award • 1995, Associate Fellow, Third World Academy of Sciences • 1995, Scientific and Technological Research Council of Turkey, Basic Science Award • 2004, Fellow of the American Academy of Arts and Sciences • 2005, Member of the National Academy of Sciences, U.S. • 2006, Member of the Turkish Academy of Sciences • 2007, Vehbi Koç Award from the Koç Foundation of Turkey • 2009, University of Texas at Dallas Distinguished Alumni Award • 2015, The Vallee Award in Biomedical Science, American Society for Biochemistry and Molecular Biology • 2015, The Nobel Prize in Chemistry