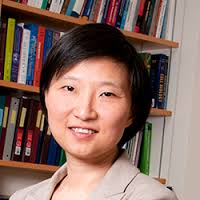 Xiaowei Zhuang, David B Arnold Professor of Science and Director of the Center for Advanced Imaging at Harvard University, and an HHMI Investigator, will receive the 2019 NAS Award for Scientific Discovery at the NAS Annual Meeting on April 28, 2019.

Zhuang, appointed a Vallee Visiting Professor in 2017, is a world-renowned pioneer and leader in super-resolution imaging, single-molecule imaging and genomic-scale imaging. The technologies developed by the Zhuang Research Lab have provided critical understanding of the molecular mechanisms of cellular function.

In addition to the development of the technology itself, Zhuang has employed STORM to make groundbreaking discoveries of novel cellular structures. She discovered the periodic membrane skeleton structure in neurons, provided new insights into the molecular organization of synapses in the brain, and revealed novel chromatin structures important for gene regulation.

Recently, she has taken molecular imaging to the genomic scale by inventing Multiplexed Error-Robust Fluorescence In Situ Hybridization (MERFISH), which has enabled the mapping of the spatial organization of the transcriptome and genome inside cells as well as the mapping of distinct cell types in complex tissues.

The NAS Award for Scientific Discovery is presented every two years to recognize an accomplishment or discovery in basic research, achieved within the previous five years, that is expected to have a significant impact on one or more of the following fields: astronomy, biochemistry, biophysics, chemistry, materials science, or physics through the selection of recipients of the Award. Endowed in 2014 in honor of John P. Schaefer through a gift from Research Corporation for Science Advancement (RCSA) and the Frederick Gardner Cottrell Foundation. This award is presented with a medal, a $50,000 prize, and $50,000 to support the recipient’s research.