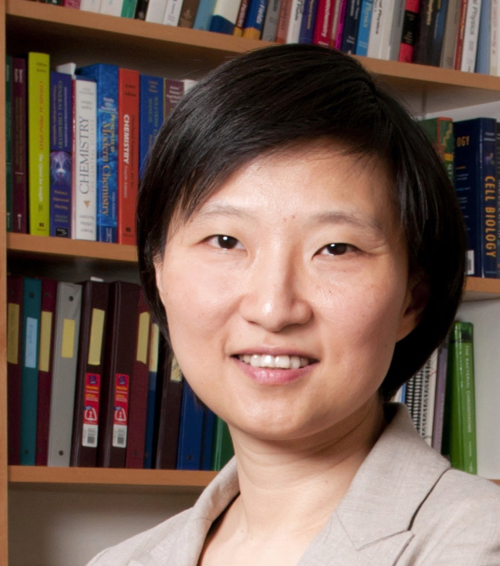 North Bethesda, MD, April 15, 2021 – The Foundation for the National Institutes of Health (FNIH) has named Xiaowei Zhuang, PhD, winner of the 2021 Lurie Prize in Biomedical Sciences for pioneering the development of super-resolution microscopy and genome-scale imaging showing new spatial and functional organizations of molecules and cells. Dr Zhuang’s innovative work with microscopy has enabled researchers to visualize with high resolution the positioning of and interactions between molecules in a cell, as well as the spatial organization of distinct types of cells in tissues. Her discoveries have made a significant impact all across the field of biology, with seminal applications to cell biology.

Visualizing the interior structures of cells has been a central goal of scientists since the late 16th century. How precisely these structures can be defined is limited by the physical properties of light itself, the so-called diffraction limit of light. Dr Zhuang developed a super-resolution imaging method, Stochastic Optical Reconstruction Microscopy (STORM), which overcomes the diffraction limit and permits nanometer (one-billionth of a meter)-scale resolution. Using this method, Dr Zhuang has identified never-before-seen structures in nerve cells in the brain.

“Dr Zhuang’s innovative work has transcended the spatial resolution limit of light microscopy, breaking boundaries that scientists were formerly unable to cross in their exploration of biological systems,” said Maria C Freire, PhD, President and Executive Director of the FNIH. “The ability to visualize molecular interactions and networks inside the cells could lead to the discovery of new cellular processes and potentially revolutionary therapeutic interventions.”

Dr Zhuang - appointed a Vallee Visiting Professor in 2017 - is the David B Arnold Professor of Science and Director of the Center for Advanced Imaging at Harvard University and a Howard Hughes Medical Institute investigator. In addition to launching STORM, her lab also developed a single-cell genome- and transcriptome-imaging method, multiplexed error-robust fluorescence in situ hybridization (MERFISH), which has generated a molecularly defined cell atlas of important brain regions and maps of the 3D organization of the genome and transcriptome inside cells. Dr Zhuang is also a co-founder and consultant at the life sciences company Vizgen. She earned a PhD in Physics from the University of California, Berkeley, and was a Chodorow Postdoctoral Fellow at Stanford University.

“I am very excited and grateful to receive the Lurie Prize in Biomedical Sciences. It is a great honor to join the group of distinguished scientists who have previously won this prize,” said Dr Zhuang. “The award recognizes not only the impact members of my lab made on biomedical research but also, importantly, the approach of using physical and quantitative methods to study biological systems, an approach that is used by increasingly more scientists worldwide.”

Now in its ninth year, the Lurie Prize in Biomedical Sciences recognizes outstanding achievement by a promising scientist aged 52 or younger. The prize includes a $100,000 honorarium, made possible by a donation to the FNIH by philanthropist Ann Lurie, President of the Ann and Robert H. Lurie Foundation and President of Lurie Holdings, Inc.

“Dr. Zhuang’s passionate quest to make visible the invisible is remarkable,” said Ms. Lurie. “Her work has already made deep inroads in understanding cell structure and behavior. As an immigrant to the United States, Dr Zhuang’s message that science doesn’t have country boundaries resonates strongly. Dr Zhuang, the 2021 recipient of the Lurie Prize, is inspiring a global community of scientists to join her in mapping every molecule in the body.”

For more information about the Lurie Prize in Biomedical Sciences and a list of previous winners, please visit fnih.org/LuriePrize.

About the Foundation for the National Institutes of Health The Foundation for the National Institutes of Health creates and manages alliances with public and private institutions in support of the mission of the NIH, the world’s premier medical research agency. The Foundation, also known as the FNIH, works with its partners to accelerate biomedical research and strategies against diseases and health concerns in the United States and across the globe. The FNIH organizes and administers research projects; supports education and training of new researchers; organizes educational events and symposia; and administers a series of funds supporting a wide range of health issues. Established by Congress, the FNIH is a not-for-profit 501(c)(3) charitable organization. For additional information about the FNIH, please visit fnih.org.