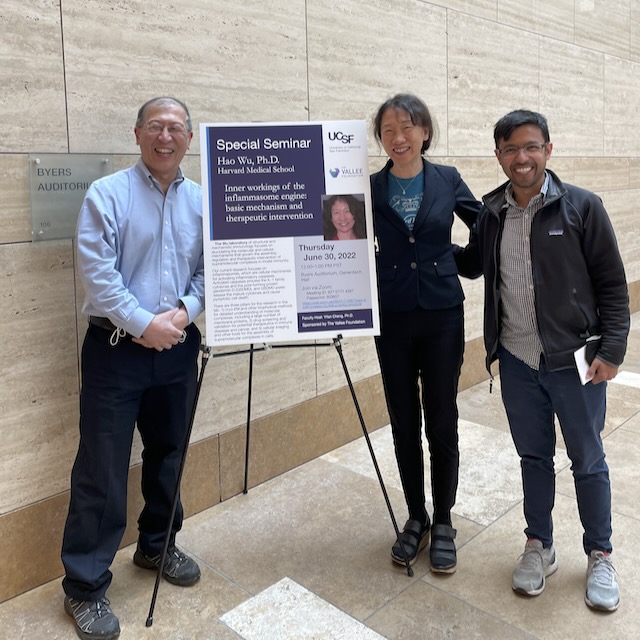 Hao Wu, PhD, Asa and Patricia Springer Professor at Harvard Medical School and Boston Children’s Hospital, spent her VVP sabbatical at the University of California, San Francisco where she was hosted by Yifan Cheng, Professor of Biophysics and an HHMI Investigator. Wu, a structural immunologist with a research focus on elucidating fundamental questions in immunity using primarily structural biology approaches, was attracted to UCSF because of its leadership role in the cryo-electron microscopy (cryo-EM) technology and its scientific strength in immunology.

"I was particularly interested in the new way [Yifan Cheng and the cryo-EM facility personnel] designed their affinity cryo-EM grids on graphene so that samples can be linked to the grids by affinity to allow even distribution and to reduce sample damage by denaturation at the air-water interface during plunge freezing. Discussions along this line inspired me to develop better affinity grids to purify samples directly from cell lysates in a one-step sample preparation flow for cryo-EM, which is currently being optimized in my lab. This technology, if successful, will change how cryo-EM is performed and enable the direct visualization of endogenous molecular complexes from cells."

The sabbatical provided Wu with ample time to meet with faculty members on both UCSF campuses.  Topics for discussion ranged from structure-based ligand discovery to tyrosine kinase signaling, from type 1 diabetes and the role of the transcription factor AIRE to the connections between imflammasomes and tuberculosis.  Conversations with junior faculty – among whom were Vallee Scholar Aashish Manglik -- were equally rewarding.

"Among those I met, many are women or otherwise belong to an underrepresented group in science, and I was able to meet and talk to many trainees. I absolutely enjoyed the different perspectives from the diversity, and the debugging of experiments with trainees. These activities made me feel like a real professor engaging in teaching the next generation of scientists and in contributing to science and society."

Dr Wu’s two seminars, one on inflammasomes focusing on the biophysics and the mechanisms and the second on the immunological aspects of inflammasome biology and therapeutic intervention, were very well received.  And informal meals and hikes in the Bay Area with faculty, trainees, friends and family rounded out the sabbatical.