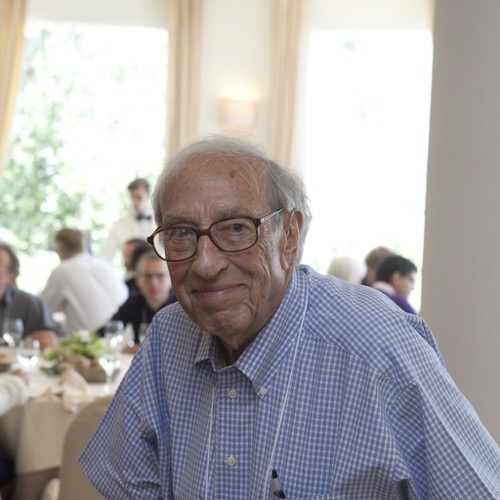 Edmond H Fischer, PhD, known to us all as Eddy, a long-time professor of biochemistry at the University of Washington and one of the first Vallee Visiting Professors (in 1998), died peacefully in Seattle on August 27, 2021 at the age of 101. Eddy was a biochemist best known for his discoveries concerning reversible protein phosphorylation, a fundamental regulatory mechanism in cells, for which he and his collaborator, Edwin G Krebs, received the 1992 Nobel Prize in Physiology or Medicine. In a 2014 interview for the Vallee Foundation’s oral history project, Eddy talked about first meeting Bert Vallee. He became a Director of the Vallee Foundation, remained a great friend of Bert and Kuggie Vallee, attended most of the Vallee Foundation meetings and symposia - his last was 2016 in Rapallo, Italy, where this photo was taken - was charming, very witty, and eager to hear what you had to say.  He will be much missed, as fellow Director and VVP Gordon G Hammes, attests here:

“Very hard to believe that Eddy is no longer with us. I thought he would live forever, and he almost did. His legacy will be carried on by his many scientific friends, children and grandchildren. I knew Eddy for about 60 years. He and Bert Vallee were great friends, and Bert frequently consulted with him on various projects and science. He was a regular visitor at the events Bert carried out in the name of the Vallee Foundation and an original member of the Board of Directors. Of course, Eddy’s contributions to science are monumental, but I remember him most of all as a wonderful person. He had an encyclopedic memory of almost any field you would like to discuss and remained curious to the end. Bert and Eddy (and I) shared a passion for good food and wine. And we took every opportunity to indulge ourselves. I first met Bert in the early 1960’s, and he introduced me to Eddy at an international meeting in NYC. Very soon afterward, Eddy invited me to the University of Washington to give a seminar, and I remember the great Chinese dinner he organized.

The three of us shared a common scientific field, enzymology so that we met frequently at meetings.The Protein Gordon Conferences, which all of us attended regularly, were particularly memorable. Eddy was a tennis player at that time, quite respectable, and we would play doubles at this meeting.  I also discovered Eddy’s interest in music, as I too was once an aspiring pianist. Eddy performed at a Vallee Foundation meeting, accompanying a violist.

Hans Neurath, Eddy, Bert, and Earl Davies were instrumental in the creation of the journal Biochemistry, now one of the top journals in its field. Many years later, when Hans stepped down as editor, Eddy was of great assistance in passing the baton to me.

Unlike many Nobel Laureates, Eddy continued to do terrific science after getting the Prize. Even after his laboratory closed, he maintained a passionate interest in science and enjoyed sharing his vast knowledge with young scientists. In many ways his career was a paragon of the philosophy of the Vallee Foundation, namely to foster basic research, research collaborations, and young scientists. When Krebs and Fischer began their research on phosphorylase, they had no idea that understanding phosphorylase would have such grand implications for the world of biology and medicine. Eddy was one of a kind, a true renaissance man, who will be missed by all who crossed his path.” (Gordon G Hammes, PhD, Distinguished Service Professor of Biochemistry Emeritus, Duke University)

Obituaries can be found in  the New York Times, the Washington Post, on the University of Washington website, and elsewhere.