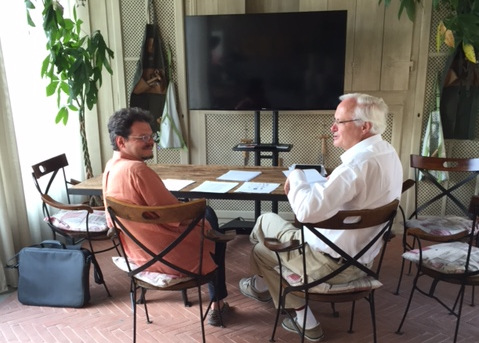 One Month in Florence

Chris Dobson, John Humphrey Plummer Professor of Chemical and Structure Biology at the University of Cambridge, has been collaborating for more than 20 years with the Biochemistry Department of the University of Florence.  These interactions are primarily focused on the investigation of protein folding and have resulted in multiple papers.  It was only natural then that he chose to take his Vallee Visiting Professorship in the city of Dante, Giotto, and the Italian Renaissance.  His month in Florence provided ample time to further these collaborative interactions and write a review article with Fabrizio Chiti, a former student and professor there.

Proteins have a natural tendency to convert from their native forms into insoluble aggregates and this phenomenon gives rise to a range of debilitating human diseases including Alzheimer and Parkinson diseases, type II diabetes and amyloidosis.  Their review article, submitted in September and due to appear later this year, summarizes the background to this field of science, provides lists of the proteins forming amyloid and other types of protein deposits in human pathology and of disorders associated with the deposition of these proteins, as well as of those proteins that exploit the amyloid motif to play specific functional roles in humans.

Having one month to focus almost entirely on the article, allowed Dobson and Chiti to discuss the genetic factors associated with such diseases with the aim of defining the links between amyloid formation and pathogenesis.  They describe recent advances in our understanding of the structure of amyloid fibrils and their precursor species, and outline our increasing understanding of the mechanisms of their formation and ability to cause cellular dysfunction. They also discuss evidence that a complex proteostasis network actively combats protein aggregation in living systems, the reasons why such an efficient system fails under specific circumstances, and how such information could help to enable rational therapeutic intervention in this class of disease.

August is not the best month in Italy for public lectures, so Chris will return to Florence this spring to give his Vallee Lecture.  But there were plenty of scientists in residence last summer for him to spend time with faculty, students and post-doctoral fellows in the Department of Biochemistry in Florence, including members of the groups of Professors Fabrizio Chiti, Massimo Stefani, Cristina Cecchi and Francesco Bemporad, with whom he discussed a range of future research projects, several of which are now actively under investigation.