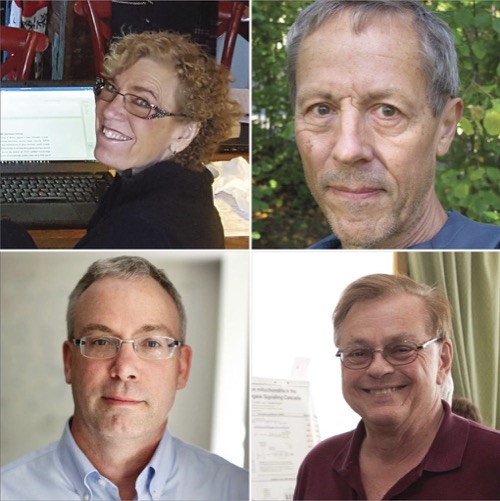 The Vallee Visiting Professor program, considered the signature program of the Vallee Foundation, has been a resounding success.  Seventy-one VVPs have been appointed to date and have travelled to laboratories in Europe, the United States, Australia, Israel, and Singapore.  Most have found the one-month format ideal and reports all include an enthusiastic version of “It was the only time in my academic life that I had been offered a sabbatical that I could actually take,” and “I came back totally invigorated and full of new ideas.”

Recently, the Vallee Foundation offered scientifically active VVPs, with a concrete research collaborative goal, the opportunity to apply for a second, one-month sabbatical.  The following four will be heading overseas in the next year or two to further their research and to establish new, or strengthen existing, collaborations:

Elaine Fuchs, PhD, (Rebecca C. Lancefield Professor of Mammalian Cell Biology and Development at the Rockefeller University and an HHMI Investigator) spent her first VVP sabbatical at the Institute for Research in Biomedicine (IRB) in Barcelona in 2017.  She now plans to visit the Walter and Eliza Hall Institute for Medical Research in Melbourne, Australia, where she will be hosted by Professor Jane Visvader, joint head of the Breast Cancer Laboratory, and one of the world’s foremost experts in mammary epithelial stem cells.  Fuchs and Visvader will question the similarities and differences between the epithelial stem cells of the skin and the mammary gland during development, homeostasis, and malignant progression. “There is a fundamental interest in the answers to these questions for regenerative medicine and additionally, there is a need to elucidate how the microenvironment changes and impacts the behavior of oncogenically transformed epithelial stem cells during malignant progression,” says Dr Fuchs. “Increasing evidence suggests that key insights can be gained from comparative investigations, and it is our hope that our experimental directions will lead to collaborative research efforts.”

Wade Harper, PhD, (Bert and Natalie Vallee Professor of Molecular Pathology, Harvard Medical School) spent his first VVP sabbatical in the lab of the late Professor Dame Louise Johnson at the University of Oxford in 2000 where he learned the basics of molecular modeling.  Now he is making plans to head to Germany where he will be hosted at the Max Planck Institute of Biochemistry in Martinsried by previous VVPs Drs Brenda Schulman, Wolfgang Baumeister, and Ulrich Hartl. Autophagy is the process by which protein aggregates and damaged organelles (ie cargo) are removed from cells. The Harper lab has been exploring autophagy regulator mechanisms for some time and has already developed a highly interactive collaboration with these three scientists in Martinsried where a newly emerging technique called cryo-electron tomography (cryo-ET), principally developed by Wolfgang Baumeister, is already making strides to bring in situ structural biology to the autophagy field.

Stephen Sligar, PhD, (University of Illinois Swanlund Endowed Chair) was one of the very first Vallee Visiting Professors, in 1999.  He, too, travelled to Oxford where he spent a month focused on electrochemistry with Professor Allen Hill, himself a VVP.  Now, he will return to the Chemistry Department and Kavli Institute at the University of Oxford, where he will be hosted by Professor Dame Carol Robinson.  There, Dr Sligar hopes to explore the application of mass spectrometry to the supramolecular complexes interacting with Nanodiscs, true nanoscale bilayer membranes rendered soluble in aqueous solution by two encircling amphipathic helical protein belts.  Of particular interest are the protein-protein and protein-lipid recognition events that are involved in KRas4b cancer signaling.

Gunnar von Heijne, PhD, (Professor of Theoretical Chemistry and Director of the Center for Biomembrane Research, Stockholm University) is planning to spend his second VVP sabbatical at the Rockefeller University hosted by Dr Rod MacKinnon – his host first time round in 2012.  The MacKinnon lab is the world leader in structure-function studies of ion channels, while von Heijne’s research interests revolve around the basic mechanisms of cotranslational membrane insertion and folding of integral membrane proteins.  The von Heijne/MacKinnon collaboration is of long standing, but the opportunity to work together side-by-side is a rare privilege.  Dr von Heijne will also make use of the deep expertise in cryo-electron microscopy available within the MacKinnon lab and at the Rockefeller University Cryo-EM Facility to further his ongoing cryo-EM studies of ribosome-nascent chain complexes.