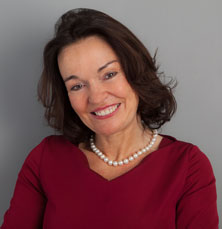 Vallee Foundation Director and Vallee Visiting Professor (VVP), Professor Dame Carol Robinson has been named the recipient of the 2019 Novozymes Prize and the 2019 Stein & Moore Award.

The 2019 Novozymes Prize is being awarded to Carol Robinson for her scientific breakthroughs in the use of mass spectrometry for proteome analysis. Her methods are widely used in the biotech industry and have contributed to identifying both new protein drugs and new drug targets.  One of her many ground-breaking ideas was to add detergent to samples where the molecule of interest was contained within a lipid bilayer, for example proteins in the cell membrane. These proteins usually unravel from their folded structure within the mass spectrometer. The soap bubble protects the sample, meaning it can be properly characterised. The Novozymes award particularly celebrates this breakthrough as part of Professor Robinson’s development of mass spectrometry proteomics as a subfield.

The Novozymes Prize, given by the Novo Nordisk Foundation, aims to raise awareness of basic and applied biotechnology research.  The Prize is awarded to recognize outstanding research or technology contributions that benefit the development of biotechnological science for innovative solutions. It is awarded for a predominantly European contribution.

Carol Robinson has also been named the 2019 recipient of the Stein & Moore Award, sponsored by The Protein Society.  Named for Nobel laureates Dr. William Stein and Dr. Stanford Moore, the award is given to recognize eminent leaders in protein science who have made sustained high impact research contributions to the field. Professor Robinson's research focuses on applications of mass spectrometry to the study of proteins and their interactions. Early in her career she modified instrumentation to transmit folded proteins, molecular chaperones and other dynamic macromolecular assemblies. Subsequently, she has concentrated on membrane protein complexes, their modulation through lipid and drug binding, and their study from native membrane environments. Overall, Professor Robinson's sustained and focused effort has resulted not only in new insights into protein structure and function but has also established a new field - that of structural biology in the gas phase.