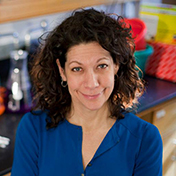 Bonnie Bassler’s research focuses on the molecular mechanisms that bacteria use for intercellular communication.  This process is called quorum sensing.  Her work is paving the way to new therapies for combating bacteria by disrupting quorum-sensing-mediated communications.