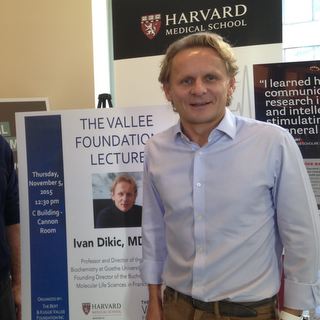 Ivan Dikic, Professor of Biochemistry and Director of the Institute of Biochemistry II, Goethe University Medical School, Frankfurt, has spent his career understanding the mechanisms of ubiquitin signaling.  Ubiquitin is the most versatile form of post-translational modification known to date controlling a large array of diverse cellular processes.  One of the leading centers in the field is at Harvard Medical School where Dr Dikic recently concluded his Vallee Visiting Professorship.  In particular, he said, he was attracted to the modern multidisciplinary experimental approaches - including proteomics, bioinformatics, large-scale screens and microsocopy methods - that are developed in Boston.

Wade Harper, Bert and Natalie Vallee Professor of Molecular Pathology, welcomed Dr Dikic to his lab in the Department of Molecular Cell Biology for three weeks in July and a fourth week in November.  In Boston, Dr Dikic had ample opportunity to exchange new ideas and developments in the field with postdocs in the Harper lab and scientists active in the ubiquitin field in other HMS departments, as well as at the Broad Institute and at Biogen and Boston Biochem, two companies with operations in the field of ubiquitin/proteasome research.  “All of these meetings were characterized by an extremely friendly and open atmosphere giving room for the discussion of current challenges and technological advances as well as for the exchange of novel data and original ideas,” wrote Dr Dikic. “This was indeed very inspiring and in many ways affected my thinking and the conception of new projects. Also, several contacts were initiated that surely will lead to future collaborations. This high degree of intensive intellectual exchange was only possible in this particular setting, and all discussions went far beyond what is usually achieved at scientific meetings or in departmental seminars.”

On November 5, 2015, Dr Dikic gave a Vallee Lecture at Harvard Medical School where he presented his data on ubiquitin and autophagy networks and explained how these pathways regulate normal cellular processes and how they are involved in the pathogenesis of several human diseases.  The auditorium was packed and the lively discussion which followed was a rich and rewarding conclusion to Dr Dikic’s Vallee Visiting Professor sabbatical.